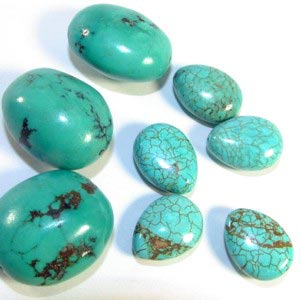 Typically, turquoise is found as an opaque deposit in nodules, or veins within host rocks, or as shallow crusts on the surface of rocks.

Color ranges through shades of blue to blue-green, to yellowish green depending on the amount of copper, (adds blue,) chromium or vanadium, (adds green,) and iron, (adds yellow). There are rare specimens of blue-violet color which contain strontium impurities. In general, US mines produce slightly greenish blue, to green gems due to high iron and vanadium content. Most turquoise rough contains patches or veins of the host rock in which it formed, such as chalcedony or opal, brown limonite, black chert, or white kaolinite.

The US deposits are almost exclusively limited to the Southwest with Nevada home to a larger number of mines than Arizona, New Mexico and Colorado put together. This is a source of pride for Nevada and turquoise is, in fact, its official State Mineral.

Historically, and to a large extent today, the most admired stones are those of a fine robin’s egg, or celestial blue color, with no visible matrix, (this shade is an indication that no iron and little vanadium is present). Sometimes referred to as "Persian grade," turquoise of this sort is still produced in Iran, but has been supplemented by similar stones from the US, particularly those obtained from the Sleeping Beauty Mine near Globe, Arizona.